We started the animation work ten years ago and we maintained our commitment since then. In the beginning, we were new to the whole concept. But with a decade of experience, we have learnt how to be effective in the process of animation work. If our intention is that rural women should accept us in our role as animators and not only as rural women as themselves, we have to resort to some media for convincing them about the genuinity of our work. We wish indeed to transmit to them what experience and knowledge we have acquired in the process of animation work.

With this purpose, we started in particular participating in the work of collection and valorisation of the grindmill songs. All of us as much as other women in the villages know them by heart. This oral tradition of ours became a useful medium in the meetings of the rural women of different villages and hamlets of the Mulshi and Mawal Taluka of Pune District, the area where we do our animation work. Let us only give some concrete examples here.

In a village, a meeting of women was organised. Women requested us that they should be let free and go home at 10 o’clock in the night because they were tired after a whole day of hard work. In the course of the meeting, one of us sang two grindmill songs with reference to the point which we were putting forth and they literally electrified the whole atmosphere:

At the heart of a huge fire, the tender areca-nut burns away,
There’s no appreciation for a girl’s labours at her home or at her in-law’s.

Engulfed in flames, a patch of greenery burns away,
Wherever a woman goes, she must toil.

The meeting went up to one o’clock in the morning. The participants in the meeting expressed: “You started singing our songs and then, we never realised how time passed.”

In another village, women gathered in one house where the verandah was quite large to accommodate 40 to S0 women. Before we started the meeting, the lady from the house said: “You better choose another house for the meeting. I have to get up early in the morning.” This was given as an excuse for not participating in the meeting, as she was afraid. We shifted to a nearby house and started discussion. While discussing, we sang some grindmill songs:

Mother and father say :”Daughter, you must die there, where we handed you over,
The firewood must burn away in the hearth.”

As usual women participated. The meeting became very lively. Next morning, the same lady who had been listening from her house, told us: “Excuse me. I should not have insulted you. I was listening and now I am convinced that your animation work is useful to the village. You were using our tradition.” We told her, “It is not your fault. You have never been exposed to any other type of gathering and any other type of thought process. That is why you objected. If you are convinced yourself, you can join us and start attending our meetings and gatherings.” Since some months, the lady regularly attends our meetings.

In yet another village, the meeting of women was going on. Some adolescent girls peeped in and slowly entered the room. Immediately, the elder women already sitting in the room scolded the girls and wanted to drive them out. We remembered one grindmill song:

Born a girl, you are too effervescent,
The earth implores pity: “Step lightly, my child.”

We quoted this song and commented upon: “We are taught to repress girls. In our meeting, we have to think of the reasons behind it.” We continued the subject and women participated.

Childhood is a kingdom, the best kingdom among all kingdoms
Let youthfulness be burnt! Youthfulness stands guilty.

This topic of girl’s socio-cultural repression really goes against prevailing normative culture, still women liked the discussions and as a result continued to keep contact with us since then. It appears that they appreciated the method that we followed as well as the content of the meeting.

When we use grindmill songs, the women participants go on singing songs. We then try to make use of those songs which may help us to put forward some analytical or critical points. For example, we use the following songs:

What fool decided that a woman’s life should be?
At her parents’ or at her in laws’ she labours for life like a bullock.

A woman’s life! If I’d known, I wouldn’t have been born,
I’d have become a plant of sacred basil at god’s door.

Then, we continue asking them some questions. “Why do we regret our own birth? What then about our existence? How does this society ask us to work like bullocks in an alien house?”

When such questions are raised in the meetings, the women gathered start thinking over it. They feel surprised to find how these songs can be related to their own problems and their own mind sets. They always express the following reaction: “Really, we have never understood our own grindmill songs in this perspective. The questions posed are genuine. We are used to open up our minds in these songs. The only thing is that we have not looked at them in this way. They certainly help us understand our own condition better.”

The reinterpretation of the same songs which women have been singing for generations, provides the basis for starting a thought process in different and new directions.

This is not a millstone, but a hermit from the mountain
I tell you, woman, open your heart to him.

We tell women in village meetings: “While singing like that, we open up our heart to the stone. Now, slowly this place of expression is vanishing. Millstones have gone, flourmill has come. Then, we have to find another place to express our minds and share our sorrows and joys. There are many question marks before us and we have to face them. Meetings like this can provide us with another space.”

Recalling the songs in village meetings reactivates memory, boosts awareness and constructs a common identity among peasant women. Yet songs should not be resurrected only for the sake of their last female heirs neither restricted to communication with illiterate or half educated rural population. What illiterate women spoke out for themselves as a collective soliloquy can now be spoken up for all and addressed to all those who use to overlook their speech. It is in particular the task of women social animators to show the relevance of their mothers and grand-mothers’ tradition to an academic society of professors and scholars concerned with women studies, folk culture, popular literature, oral social history, subaltern studies, cultural anthropology, etc. Songs are an asset of communication of common women with the academic intelligentsia, two worlds which stand totally apart from one another to the detriment of genuine anthropological knowledge.

As an example, this is the presentation that I made at Nanded (Maharashtra) in January 3, 1995 in the course of a seminar on Collection and study of the grindmill songs: a perspective organised by CCRSS with the departments of Sociology and Marathi Literature of the People’s College. To give a hint of the rhetoric and style of expression characteristic of the grindmill songs as symbolic system of communication, I presented the words which come to the mind when a girl child is born. They all express disgust and helplessness. The following eleven key words show the communicative and cognitive power of most common words, images and literary similes.

When you agree with us and acknowledge that our mothers and grand-mothers have composed on the millstone at dawn that living tradition, you ask us why then they did not act against this condition. 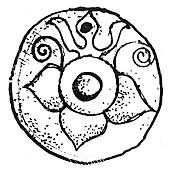 Our answer is that society was keeping hold of them and they were not given any chance to act upon. They understood very well but spoke up only in a dark corner of the house and at a time when all men were still sleeping. Nowadays, ideas are changing and a bit of freedom is given. We toiling women wearing nine yard saris take time to think for ourselves. We have started investigating and seeing through the trickery that stands behind what was received as truth yesterday: who did this and for whose vested interests?

A few of us are gathering to study this. But how to make our observations reaching out to other women? We resort in particular to grindmill songs for this purpose.